"We've enjoyed Rosie's stories for ten years in a row and have hired her for  an eleventh year. Her combination of storytelling, audience participation and music are the right mix for a wide range of students." 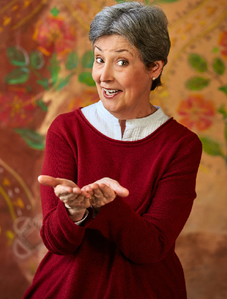 "Rosie is a tour de force in storytelling. She accommodates all ages and has performed at the national park service for three years now. She was so well received that the principals and teachers have asked her back for a return engagement."

Material for the Media
The short blurb, full-page press release & photos below can be used for publicity purposes. Feel free to copy & edit these items to fit your needs.
The photos may take a few seconds to come up on the screen.

PRESS RELEASE
The person publishing the article can fill in location, time, etc.

Rosie learned the art of storytelling from participating in workshops  throughout the U.S. and has gotten personal coaching from national storytellers Bill Harley and Milbre Burch. When asked why she decided to leave teaching after so long Rosie replies, "I always wanted to  use that long neglected theater degree I got way back in 1972. At age 50 I decided that if I ever wanted to becomea performer, professionally, it was now or never. Story telling was a perfect fit because it combined my expertise in working with children with my experience as an actress. In the year 2000 I took the big leap and started to devote
myself full time to storytelling." Rosie goes on to say, "Like any business it has taken me
several years to build up my list of clients but now I find myself on the road more and more."

Mrs. Cutrer works with all ages. For younger groups she tells folktales, fairytales, ghost stories, stories based on literature, poetry, folksongs and her own original works. She is also a songwriter and accompanies herself on the banjo. Two of her storytelling CDs have won awards from the Children's Music Web for Best Performer for both younger and older audiences. They are available for purchase online at CD Baby.com.

Additionally Cutrer has a pioneer program where she comes dressed in 19th century costume to share history, artifacts music and stories.

For adults she presents the same as above but chooses tales that have more adult content. She says, "So many of those old folktales wren't really aimed at children. They were for adults to entertain one another with on cold winter evenings in a world without electricity." You can learn more about Rosie's programs by visiting her website: www.rosiecutrer.com.

Cutrer is a lifelong resident of Topeka where she and her husband Bill now have 15 grandkids who range in age from one to twenty years...and yes she practices much of her material on her family. Rosie finds that her family members are her best critics, especially the little ones. "They'll tell you the stories that they want to hear over and over again."

All in all Rosie finds life on the road as as storyteller personally fulfilling as well as interesting. In October of 2010 she went on a storytelling tour of Ireland performing for libraries and schools in County Wexford and County Antrim, Northern Ireland. Rosie hopes to continue on the road as long as she can, hopefully well into her old age. Who knows? She might find and interesting story to tell in your town.

THE PHOTOS BELOW MAY BE DOWNLOADED FOR YOUR ADVERTISING NEEDS - SIMPLY RIGHT CLICK ON THE PHOTO OR PHOTOS THAT YOU  WANT AND SAVE  TO YOUR FILES - THEY MAY TAKE A SECOND OR TWO TO APPEAR ON THE SCREEN.